How Not to Use LinkedIn for Sales

The image below is from an InMail I received today. The person sending it is inquiring about my need for help with sales. He believes he can help me “increase revenue and reduce my turnover with his award-winning sales optimization.” “The best part,” according to the sender, is that “over the past 25 years,” they’ve “helped hundreds of company turn their sales teams performance around.” 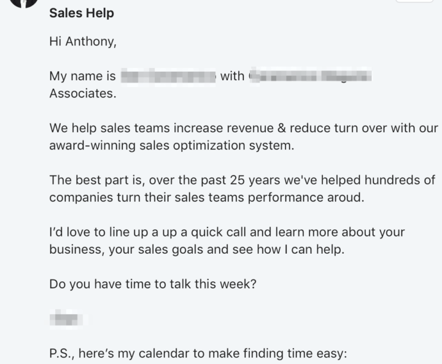 As is customary from the innumerable LinkedIn spammers clogging up the inbox you never requested, the sender has included a link for me to schedule a meeting with him directly, as if somehow this pitch should cause an irresistible urge to add myself to his calendar.  His pitch promises nothing of value in trade for my time, is devoid of any insight that might pique my curiosity, and offers me nothing more than a chance for him to pitch me, under the tenuous disguise of “see how I can help.”

The oblivious sender also demonstrates an unawareness of the fundamental that is doing the minimal viable research before sending an InMail or making a call. Worse still, the idea that this is the right prospecting approach in the 21st Century is an indication that the sender is so out of touch with sales as it is practiced today as to believe that spamming people on LinkedIn is a growth strategy. A glance at his calendar is an indication it is not, as there are plenty of times available, all of them are grouped tightly together without an intervening appointment, indicating no one has scheduled a meeting on the days he is available.

Within an hour of receiving the first time-waster’s poorly conceived pitch for a meeting, a person with the title VP of Sales decided to steal my time (and likely hundreds more) by telling me how many qualified leads he created for “businesses like” mine, even though it is clear he has no idea what I do. If he had any awareness of what I do, he would not have written that one of his “clients got 131 clients in the first 5 months,” a clear indication he is looking for people who need help with transactional sales. Or, more likely, anyone who might be gullible enough to pay him for the experience in the picture below, which I suspect might be the CEO in the first image. 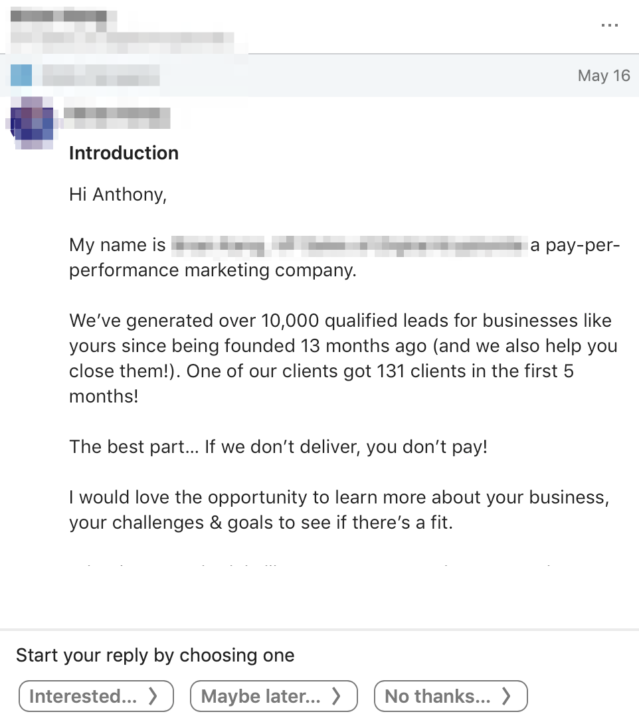 Using the same lame line as time-waster number one, he writes: “The best part . . . If we don’t deliver, you don’t pay!” However, there is no best part.

This is not prospecting. It is spam. It isn’t how you should use LinkedIn, and it isn’t how you promise to create enough value to compel your targeted dream client to trade you their time.