How to Avoid the Tyranny of Process by Becoming Agile

Of all the changes in selling over the last decade and a half, the changes on the buyer’s side may be the most disruptive. No doubt that some part of that change belongs to the proliferation of information available via the internet. However, another, and I would argue, a more important change is how difficult it is for buyers to make decisions, partly due to the need to acquire consensus and the difficulty in doing so. These and many other factors have made whatever might once have been a linear sales process more difficult to follow and maintain. It has also made the buyer’s journeys seem quaint by comparison. All that is necessary to understand just how nonlinear they are is to catalog the stakeholders by where you believe they are in whatever your buyer’s journey suggests, and where you find different stakeholders at different places at different times.

The tyranny of the sales process is slavishly adhering to the idea that the sales conversation is going to follow the linear progression as seen on a slide deck, starting on the left side with “target” and ending on the right with “won.”

Disclaimer: I would never suggest you go without a sales process. There are too many outcomes necessary for competing effectively and winning. Nor would I recommend you forego a functional theory about how to serve the stakeholders you call on based upon where they are in their process. Instead, I would suggest you consider both your process and your buyer’s journey as “orienting generalizations” and consider your approach based on initiative and agility.

My first attempt to write about the limits of a documented sales process was almost a decade ago when I compared them to a GPS (global position satellite), a device which occasionally provides the guidance, “turn by turn directions are not available in this area.” The message can be disconcerting if you were counting on GPS to direct you to your destination, and it might as well have said, “Guess what? You’re lost!”

The fact that you have a GPS at all might put you in a better place than your dream client, who may not have any guidance if they are outside of a formal process and RFP.

In Gary Klein’s, Sources of Power: How People Make Decisions, there is this beautiful story under the heading The Soldiers Who Were Trained Not to Follow Orders:

“A major, receiving a tongue lashing from Prince Frederick Charles for a tactical blunder, offered the excuse that he had been obeying orders. He reminded the prince that a Prussian officer was taught that an order from a superior was tantamount to an order from the king. Frederick Charles promptly responded, “His Majesty made you a major because he believed you would know when to not obey his orders.”

Imagine you have had two extraordinary discovery meetings with three stakeholders, all of whom are engaged in the process with you and are ready to see your solution. You send a calendar invite to a meeting where you are expected to present your solution and pricing. You notice they added three more people to the calendar invite, none of whom are known to you. Your process suggests that you have completed the discovery phase and that you have obtained all the customer verifiable outcomes. The three stakeholders believe they have done their due diligence and are ready to see a solution.

The tyranny of any process is when it becomes dogma. When you ignore reality and follow the guidance of a process that doesn’t reflect the reality of your circumstances, you put doctrine above winning.

How to Think, Not What to Think

I have an ongoing conversation with a friend about whether it is better to teach people “what to think” or “how to think.” He leans more toward providing people with what to think, and I am firmly entrenched on teaching how to think. In a complex, dynamic human interaction like sales, there are too many variables to be able to provide guidance on every scenario. You are better off knowing how to think about problems than believing there is only one right answer, one way to get to yes.

We return now to the Prussians, particularly Helmuth von Moltke:

“Moltke rarely issued more than a general outline of his plans. Army and major formation commanders were to act within the framework of general directives as opposed to precise orders, with their staff officers providing any necessary interpretation and guidance. Although criticized by some, this approach, a key component of Moltke’s methods, provided the necessary flexibility to deal with different and unexpected situations, demonstrated by his use of external lines of operation . . . “

When there is likely to be uncertainty, follow the general direction, and look for solutions to the problem. You might call this agility. Instead of being locked into a process, you adjust and do what is necessary to win.

“First and foremost, like Clausewitz, Moltke had no faith in systems of any kind. His system consisted of a pattern of thought rather than a series of procedures to be followed or successive tactical acts to be performed under all circumstances. Moltke placed his faith in the ability of Prussian officers to use their education and judgment to adjust to concrete situations as they came up. His famous statement that strategy was a system of expedients typified his belief that no simple rules or formulas existed for determining military plans. Moltke’s statements should be taken against the background of the detailed systems of the eighteenth century and may be seen as a rejection of such systems. Strategy, Moltke believed, was based on concrete situations rather than upon mathematical or other rules to be applied in every case. This line of thought extended to his concepts of campaign planning and tactics . . . “

Why You Need Agility

In the Only Sales Guide You’ll Ever Need, I described resourcefulness as the linchpin attribute for sales professionals, as winning requires creativity. I also included a chapter on initiative, taking action before external forces compel you to. Both of these attributes are necessary for human endeavors where there is uncertainty and where good choices of action and novelty is possible. Too firm a demand to follow a process and you eliminate resourcefulness and initiative. Too little guidance (or no process at all) and you remove “overall intent.”Learn Anthony's core strategies & tactics for sales success at any level with The Only Sales Guide You'll Ever Need

“Moltke turned this necessity into a virtue by emphasizing the advantages of developing commanders who could exercise initiative within the framework of the high command’s overall intent. He did this by leading his army commanders primarily through directives (Weisungen) rather than detailed orders, although he was quite prepared to issue very detailed and strict orders if necessary.”

You want agility. Where there is uncertainty in outcomes and too many scenarios that fall outside of what would be optimal, you want to find a way to win, even when it conflicts with what might be codified as the next step in a documented process. The Lost Art of Closing provides a nonlinear methodology that has proven helpful when things are opaque.No more pushy sales tactics. The Lost Art of Closing shows you how to proactively lead your customer and close your sales. 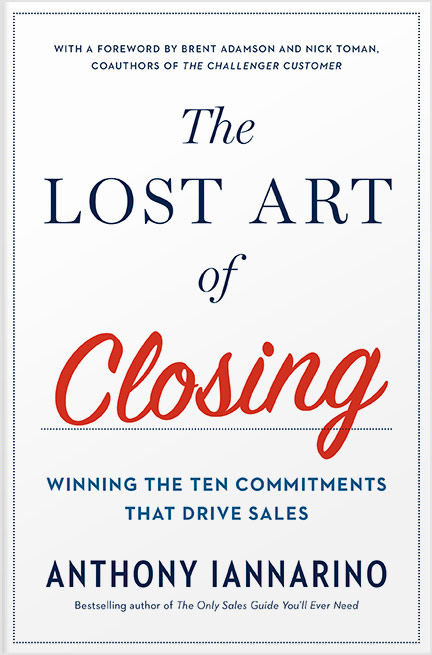 As for the scenario with the three new stakeholders, you might make a call and ask if you can meet with them before presenting. Alternatively, you might dedicate the first twenty-minutes bringing the new contacts up to speed. You could also go ahead with your presentation, even though three of your six stakeholders may not be ready to review your solution or your proposal. Were it me; I would call an audible.

There is no doubt that the ideas here not only raise the bar on the sales force; it also raises the bar on those who lead, train, coach, and develop them.