Two Quick Thoughts About Your Behavior off the Field 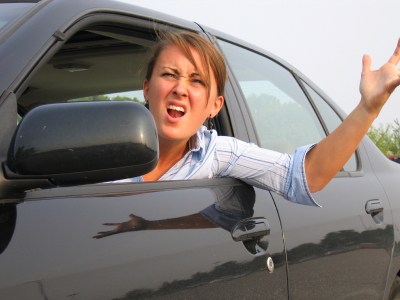 Thought One: Your Behavior Off the Field

The following is a true story. The names have been redacted to protect the guilty.

A salesperson that was working for me had a sales call across town. She was driving to the call, and the women driving next to her was on the telephone and her driving was unpredictable. Eventually, this erratic driver pulled her car in front of my salesperson, cutting her off.

My salesperson was a young girl, and she had some strong convictions and a fiery little temper when she was wronged. So, she did what to her came natural: she laid on the horn and gave the erratic driver a rather impolite, but heartfelt, gesture.

A few minutes later, she arrived at her sales call, still holding on to a little bit of her temper from having only a few minutes before being cut off. As she stepped out of her car, the woman in the next car stepped out of hers. And, as chance would have it, it was the erratic driver. They traded a quick and unfriendly glance.

The erratic driver entered the building first, followed by sales rep. My sales rep approached the receptionist and asked for the contact she had scheduled the appointment with earlier in the week.

Guess who came out to greet her.

Here is the thing: you are who you are even when you are not actually on a sales call. All the best attributes of a salesperson have to be the foundation of who you are, not behaviors or actions you sometimes take.

Thought Two: What Are You Saying About You?

There is still more to talk about with your car. I told a friend yesterday that I don’t write about politics on this blog. There is no way I could do so without offending all of you (not half of you, or even a third of you . . . I mean all of you). If I wrote about politics, some of you would discount the rest of what I write here. Some part of my message would be suspect.

It doesn’t matter how strongly you feel about your political beliefs and opinions. I understand that your 1st Amendment rights protect your freedom to speak your mind, especially when it comes to political speech. But unless what you are selling is a candidacy—yours or someone else’s—your politics should not be visible as your dream client watches you leave their parking lot.

In fact, let me take this a little further. If you have any bumper sticker on your automobile at all, go now and remove it. Period.

You do not want the first message you send to your dream client to be the fact that you are the kind of person with whom they disagree about the biggest and most important issues facing our country. And I promise they are not interested in hearing your thoughts or enaging a friendly debate.

Your political opinions can cause your dream client to discount your real message.

Your politics, like mine, are sure to lose you friends and alienate people. Leave them off your bumper and out of your sales calls.

Bet you’re dying to know what happened with the sales rep in the first section of this post, aren’t you? She is an amazingly gregarious, charming person with a wonderful, self-deprecating sense of humor. She made the whole thing about her, and not her prospective client. They both laughed about it, and she got an order. She got lucky . . . no reason to see if you can pull off the same stunt.

Your behavior when you are not selling says a lot about who you are, even when you don’t want it to and even when you think it’s not fair. You are entitled to behave and believe as you wish, but how you behave and what you believe may be counted against you.

What does your behavior when you are not selling say about you? Are you ever impatient and intolerant with other people? Not they would have to be important to a deal for you to exercise your patience and your tolerance, but shouldn’t you be somebody more tolerant?

What do your political statements say about your company? Are they endorsing your message?

How do you respond to political comments and taunts that your dream client makes on a sales call? What is appropriate? What about when they make strong political statements with which you disagree?