Failing to Keep Up with the Rate of Change

One way to describe our current environment is AC/DC, an acronym for the Accelerating, Constant, Disruptive Change we have been experiencing in the 21st century. In the late 1990s, there were people who suggested the world would end with the millennium. Even though the Earth is still spinning its way around the sun, the people predicting the end of the world were right, even if their predictions were too literal.

Any list of disruptive change in the 21st century must begin with the technologies that have dominated this era, from the social media platforms that continue to divide us from our neighbors to the new business models that have changed how we communicate, travel, shop, and eat. Our politics have become populist on the Left and the Right, while the world has become safer for autocratic governments and a decline in democracies.

For most of us, these external shifts exceed our ability to adjust, as individuals and groups, including the people that make up a company or a team, all struggle to keep up.

When the rate of external change exceeds the rate of internal change, individuals and companies often fall behind. When the environment is one of accelerating, constant, disruptive change, it's much more difficult to keep pace.

The first time I remember recognizing the differential in the change was when I heard people suggest that they were not "good with computers." Even though they had taken typing classes in school, they refused to type the same information into a computer. The external environment moved forward while these folks fell behind, choosing not to keep up with the external change. Others embraced the new technologies, finding they improved their productivity and their experience.

The external environment doesn't concern itself with the individual or groups. It cares nothing about who or what gets left behind. The future is not concerned with the past, even if human beings are deeply concerned about tradition. If you believe the external change of the 21st century has benefitted humanity, you must also recognize it has a dark side. 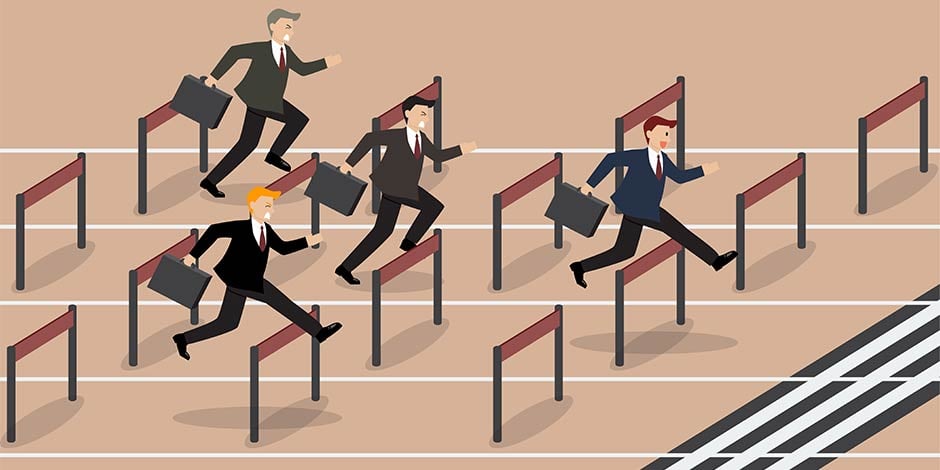 Why Your Clients Fall Behind

When the rate of change in the external environment exceeds the rate of change of an individual or a group, the individual or group can be dislocated. Your clients have processes and practices designed in—and for—another time. Many of their processes and practices were right for the time in which they were created, but they are not right for the current environment.

It is difficult to give up something that used to lead to success, even when it no longer produces the results that were once certain. It's easier and more comfortable to stick with what you know than it is to change. Under the status quo, your clients know how things work, and they are well acquainted with the devil they know. The unknown presents a different kind of devil, one that might wreak a new havoc.

Humans generally prefer certainty over uncertainty. If the 21st century has been marked by anything, it is uncertainty. The reason your clients fall behind is often because their rate of change is lagging behind the external changes.

How You Fall Behind

In sales, there are some who refuse to acknowledge the external changes that arise from the AC/DC environment. They continue doing what they've always done the way they've always done it. They reject the idea that buyers need a different type of help to improve their results, that they are plagued by uncertainty, and that the consensus they need to move forward is almost impossible.

Those whose responsibility it is to help clients change and improve their results should start by recognizing the changes they need to make to provide their prospective clients with a better approach, one that does more to help them move forward.

Sales leaders pursuing net new revenue must also increase the rate of change, enabling their salesforce to become credible and truly consultative by being One-Up. This will allow salespeople to lead their clients through the sales conversation and provide them with counsel, advice, and the recommendations that improve the client's results.

In The Only Sales Guide You'll Ever Need (a book with an unfortunate title, since it was followed by three others), the final chapter is about the need for salespeople to possess the ability to lead their clients. The idea that decision-makers are motivated to change by problems and pain is rarer than you would believe. Asking a client how long they've had a problem will make it clear that an issue and its effects are not enough to compel change on their own. Often, the salesperson can lead their client by providing them with the courage and confidence to address their need for better results by making a significant change.

Increasing Your Internal Rate of Change

There are more than enough bad and unhelpful ideas being bandied about—like avoiding face-to-face meetings, using technologies that are asynchronous instead of synchronous, and dozens of others that harm your results.

One idea worth pursuing is keeping pace with the rate of change in your client's environment. Without recognizing what your clients need from you to improve their results, you will offer too little help. A One-Down sales approach is inadequate for the client, one that falls behind the pace of change.

While you may not want to change how you sell, know for certain that many of your competitors have changed their approach to create greater value for their clients—and eventually, they will use it to help your existing clients. What one salesperson refuses to do another will embrace.

As General Eric Shinseki says, "If you don't like change, you're going to like irrelevance even less."